Chiropractic for IT Band Syndrome

Does the outside of your leg have a tight band or indention all
the way down the outside? Do you get outside of the knee pain
with 1.5+ miles of walking or running? These are common
signs of IT Band Syndrome. 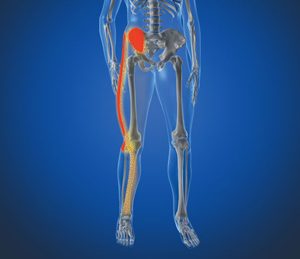 Self-Check: Does the outside of your leg have a tight band or indention all the way down the outside? Do you get outside of the knee pain with 1.5+ miles of walking or running? These are common signs of IT Band Syndrome.

What are Symptoms of IT Band Syndrome?

What Causes IT Band Syndrome?

The pain from IT Band Syndrome is caused by the tightness of the IT band itself, along with the friction a tight IT band creates with the tissues that underlie it. The most common friction causing spots are the outside of the thigh and knee. The underlying reason the IT band is tight is usually more complicated and involves a muscle imbalance.

How do you treat IT Band Syndrome?

Lengthening the IT Band will take pressure off of it and the other structures causing the pain, but maintaining that length requires proper examination to identify muscle imbalances.

The IT band is the longest tendon in the body!
IT Band Syndrome is one of the most common running injuries and usually starts between 1½ -3 miles into a run.

The Iliotibial band (ITB) is the longest tendon in the body running from the bony bump on the outside of your hip down to the outside of the knee. It often tightens up to compensate for weak muscles elsewhere which leads to problems.

This common type of tendonitis can effect either the front or the back of your lower leg. Pain will usually increase with activity and decrease with rest, however in more advanced cases it can last even into the next day and result in pain with walking. The pain felt is usually very sharp, but may be dull after activity.

It can creep up over time or with a quick tear of the muscle fibers. Your calf muscles are incredibly important in any athletics, walking and standing posture.

Sprains are generally associated with a traumatic event involving the ankle rolling in or out too much. There are three grades of sprains from mild (tenderness and limping) to severe (bruising, swelling, inability to bear weight).

Plantar Fasciitis will generally affect the heel or arch of the foot. It’s commonly a sharp pain with initial activity but will get slightly better as activity continues

“What a great group at Spine & Sport! From the staff when you check in to the knowledge of the Dr’s a very positive experience. They take a vested interested in the well being of their patients and that if a definate plus. The Dr’s are very active in the community dedicating their time from providing services at races to giving presentations on how to take care of your body and injury prevention and are always willing to help!“
– Todd F.

WE TAKE CARE OF YOUR
FAMILY LIKE WE WOULD OUR OWN